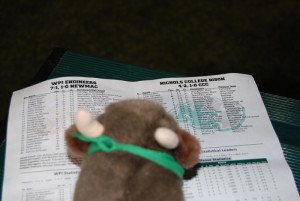 Thunder loved watching the field hockey team in their 3-0 non-conference victory over visiting Worcester Polytechnic Institute (WPI). He was impressed to know that this was only the second loss of the season for WPI and their first shutout loss since last October.  It was nice to see other student athletes cheering on the team as well as a large group of high school students who were there to cheer on a former teammate. 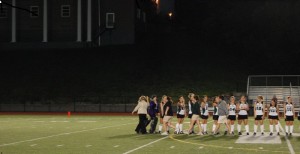 I had the opportunity to meet folks as they wrapped up last Friday’s 4th Annual Hockey Alumni and Friends Golf Tournament, that was comprised of 10 alumni, 15
current players, 2 parents, and 2 coaches. The group, along with support  from many other alumni and parents, raised $4,000 for Coach Izzi’s program.  As always, dedication to our students abounds!

Thunder was impressed with the 4-1 win that men’s soccer had over Becker College.  But just as impressive as the win was the support the team had in the stands from classmates, friends and family members.  Brendan’s mother (left) has driven from N. Attleboro to watch him over the last four years. 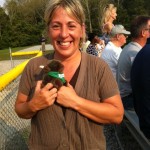 Other parents cheered from the bleachers, including Ken, one of NC’s terrific employees (right).

Thunder was also very honored to have his picture taken with Athletic Director Charlie Robert (below), and he was amazed to learn that she attends ALL athletic events.  What dedication! 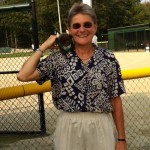 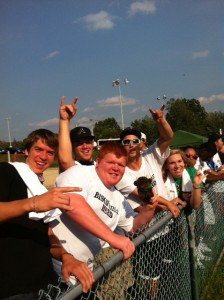 Thunder had a great time watching the Bison Women’s Tennis Team in their 9-0 home vistory over Salve Regina University.  In the picture on the left he’s in the midst of some of our terrific first-year students. 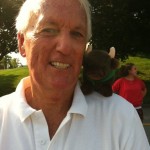 In the picture on the right he’s chatting with Dave Fleming, a loyal Nichols alumnus.

Here he is with two stars of the day. 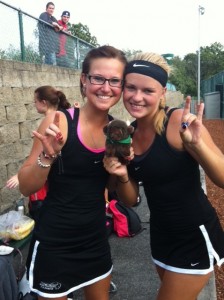 Thunder will be watching Men’s Soccer this afternoon (Wednesday, September 14th) at 4:00 if you’d like to meet him.

Many of you know about my passion for horses and riding.  A friend passed along the book “Renegade Champion,” the true story of Jane Pohl.  Jane transformed Fitzrada (Fitz) from a stubborn, unpredictable and dangerous horse that was slated to be destroyed, through a five-year journey that culminated at the 1946 Jumper Championship at the National Horse Show in Madison Square Garden.  Fitz was considered too small for jumping, and Jane, well Jane was a woman, so she wasn’t taken seriously in this male-dominated and dangerous sport until she started to accumulate record wins – a total of 37 jumper and 6 hunter championships over her riding career.

Jane helped to break down barriers against women riders in the Olympics, but she was not permitted to compete in the 1948 Olympics, even though her record was unmatched by any other rider – man or woman.  The Federation Equestrian International (FEI) would need to remove their ban on women competitors; the 1952 Olympics were the first that allowed women to compete in equestrian events.  It was too late for Jane and Fitz – he had retired in 1950 at age twenty (a ripe old age for a horse to be competitive).

I love this book because it highlights the importance of patience, persistence, and doing what you love and loving what you do – even if the ultimate prize might not be an option for you.  Jane took a mean, scrawny horse that most thought had no future and transformed him into a champion.  The bond between humans and animals can be transformational —  for both.