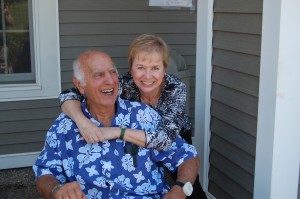 I recently saw Nichols Hall of Famer football coach Michael Vendetti at the Alumni Golf Tournament. As I have learned since I came here, “Coach” is one of the most well-liked former faculty/staff members ever at this College. He is a superstar everywhere he goes.  And he’s always going places for Nichols – from golf outings in Dudley to alumni breakfasts in Worcester.

To say that Coach has had a lasting impact on the College’s athletics program would be an understatement.  Vendetti Field is named in honor of him, and as head coach he led the football team to five New England Football Conference Championships in the 1970s. He also coached track and football from 1962 to 1985. As Athletic Director from 1980 to 1985, Coach was instrumental in adding women’s basketball, field hockey and women’s softball to the Nichols athletics program.

When Nichols hosted Coach’s 80th birthday party last year, his former players traveled from as far as Texas to be with him. Most of them consider him to be the best coach they ever had and an even better person.  Marty Power and Bill Fraser, 1978 classmates, remember Coach’s “incredible energy” and a smile that would “overwhelm you.”  Marty Power comments that “For most students, he was Coach, confidant, protector and father figure.”  Bill Fraser says that “To Coach Mike, winning was not the ultimate goal; the effort to win was the ultimate goal.” Many football players fondly remember Coach’s late wife, Joan, who would cook an after-season spaghetti and meatball dinner for the seniors.  To this day, Coach still regularly attends home football games and sits in his place of honor on the Vendetti View bench overlooking Vendetti Field.

Nichols College is honored to have Coach Mike as part of our community, to which he has brought so much for over 50 years.  Bill Fraser thinks we should rename the College to “Coach Mike’s Place for Immature Boys who Graduated as Men.”  While it might be an exaggeration, it clearly conveys the admiration of Coach Vendetti’s former players!