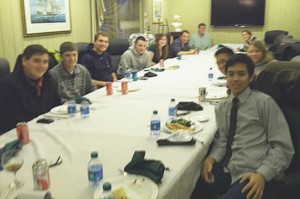 Recently, 16 students braved the poor weather to have pizza with me at an informal get-together. When we schedule these gatherings, the first 20 students to sign up can attend, and we have always been fully subscribed.  As we share pizza and soda, I am able to listen and hear firsthand about what students value most about their Nichols experience, and ideas to improve the student experience.  I consider these times as a way of keeping my “ear to the ground.”   Based on feedback, we’re exploring ways to make the residence halls an even better “home away from home.”

I have learned some of the reasons why our students so value our faculty.  I heard about an English professor who regularly sends encouraging and informative emails to students and addresses them as “Dear Learners.”  And I’ve heard how an accounting professor makes the subject “fun” (some would say that’s a tall order).

As we persist in offering a student-centered education, I will continue to listen to our students’ ideas and concerns for the campus’s overall development. 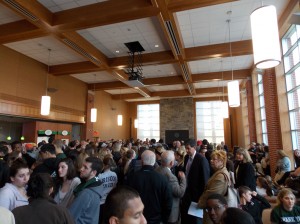 This past Friday, it was inspiring to see a room packed with students, staff, trustees, and a number of other notable individuals as we dedicated the opening of the new Fels Student Center. Through the past two years, it’s been exciting for all of us to watch the building rise up from the ground, brick by brick, floor by floor.

The new student center was already in the works when I arrived at Nichols, thanks to the guidance and vision of Jerry Fels (interim president at the time). Through his leadership on the board of trustees and as interim president, this building grew from concept to reality. Without his vision and student-centered approach, the center would not be nearly as inviting and useful for our students and the departments that serve them. 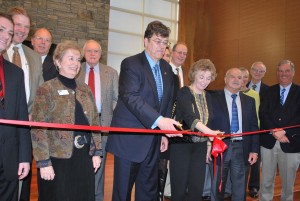 The success of our students and other young people in the community is a major part of the Fels’ mission. This is perhaps one of the key reasons that we are so proud to call this building the Fels Student Center. It unites the campus in a way no other building can and promotes the connections and community building that Marilyn and Jerry have devoted their lives to. 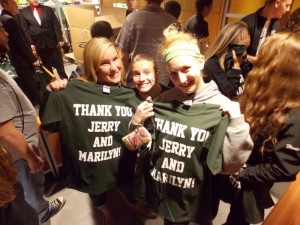 As we celebrate this Thanksgiving season, I want to express the College’s gratitude to the Fels and our many other generous donors who made this building possible.

I invite you to come to campus and visit the Fels Student Center with the WOW Cafe (and their wings!), Jazzman’s Café, and the College Bookstore. I know that you too will enjoy the beautiful view and the welcoming environment.

During these past two weeks on campus, just as the presidential, state and local campaigns were heating up, Nichols students had the opportunity to participate in programs featuring political experts.

The programs, presented by the school’s Fischer Institute and History and Political Science departments, were aimed at election–year issues, helping students become more informed about the candidates, and encouraging them to get out and vote. From pre-election analysis by a former White House Speech Writer and Presidential Scholar to a Nichols grad who is director of a political library, students gained valuable insights into the election process.

Why did Nichols put such an emphasis on the recent election? I believe that the College has a responsibility to do all it can to inform students about the issues that our politicians will need to address. And we strive to present both sides of the argument, so students can determine what position is most consistent with their individual beliefs.

Ultimately, college students hold the future of the nation in their hands. It is vital for them to vote in order to influence how our nation will respond to the critical issues we face on topics such as the national debt, taxes, immigration policy, and defense. 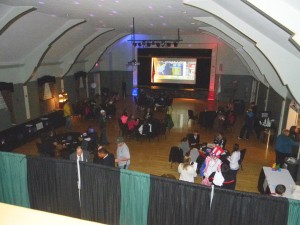 As a follow-up to the speakers, on Election Day Nichols student body cast ballots in its long-running presidential straw poll to choose the next president. A student-run election night event gave students the opportunity to follow the election night results via CNN on a large screen. Students were able to have their picture taken with a (cardboard photo) of the candidate and participate in games, refreshments and prizes.

Hopefully, as a result of these educational and fun events on campus, students will leave Nichols with a more educated and informed view of the political process.