The Student Government Association held their annual SGA Day event to celebrate the student body and to thank everyone for their hard work throughout the academic year.

The campus was abuzz with many fun events throughout the day, which included free Panera breakfast sandwiches and coffee on the Birckhead Terrace; mini golf on the Guest House Lawn; several inflatables, food, and of course the famous ice cream truck on the Copper Quad; free custom SGA Day t-shirts; a soccer game in which the students beat Eagle Cleaning 6-5; and a special guest speaker in the evening. 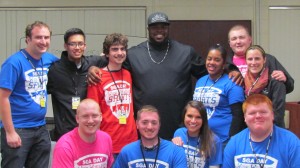 We were fortunate to close our day with a guest appearance from Vince Wilfork, a defensive tackle for the New England Patriots since 2004, when he was drafted in the first round.  Vince talked about the importance of leadership and how it can take many forms.  His examples were from his time on the football field, where some leaders are vocal and motivational, while others lead quietly by example.  He also stressed the importance of sharing your insights as new members join the team – those who look up to you as a veteran player – so they quickly become top performers and hopefully fill your shoes someday.

Vince talked about the importance of knowing when it’s your time to move on.  His personal example was that he’s still got the same quickness he had as a rookie, but the first time he slows down is when he will retire from football.  He talked about his love for the Patriots and his desire to spend his entire career with the Pats. 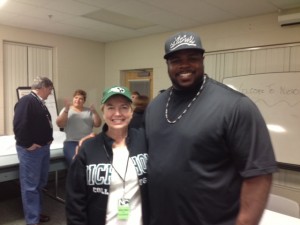 It was a terrific event with a terrific guy.  I hope I have the opportunity to watch Vince on the field with the Pats until he decides it’s his time to do something else.  I’m sure Vince’s wife, Bianca, will have some ideas of what that might be – I also had the good fortune of talking to her last night.  She is a very strong and articulate woman.  She and
Vince have been together since college, and she proudly talks about being in the stands for every game in her Wilfork or “Mrs75” jersey.

SGA Day was a great day for our students and the faculty and staff who had a chance to join in on the fun!