Recently, I read an article about the ways that women succeed in business. It prompted me to think about what it means for women and for our female students to become leaders in the future.

In the article, one woman leader discussed the ways that she became more confident as a woman. One area that she mentioned was her tendency to “play it safe” and not speak up in group meetings.

She observed that women will often start to address an issue with something like “I could be wrong here, but,” or “Maybe we should consider…” rather than a more direct approach.

At one point in my career, my boss gave me negative feedback on the ways I prepared for group discussions around a controversial issue. If it was something I felt very strongly about, I would have individual conversations with my peers so they would fully understand my position and why it was justified. My boss considered that style as a sign
of weakness, since he tended to just dominate the meeting until participants gave up. I saw my style as a way to build understanding and consensus.

While women tend to encourage participation and share power and information, I do believe that this leadership style is no longer limited to women. In our businesses and organizations, I believe we are moving toward a more “gender neutral” style of leadership where compassion and strength coexist among strong leaders, be they women or men.

As we begin the New Year, it is often a time to look back at what we have achieved during our previous year and look ahead to the upcoming year. I recently had the opportunity to do this at the annual State of the College Address. It was rewarding to report that we are well on our way to achieving the goals we set in January of 2013. 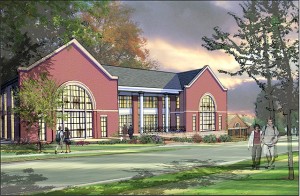 In order to provide our students with additional and much-needed financial assistance, we set the goal to grow the number of endowed scholarships. I am pleased to report our Advancement team has been successful with this quest, and they continue to work hard to further this goal. As a collaborative effort with faculty and academic leadership, we are in the final stages of designing a “wow” first-year academic and co-curricular experience for students. The new academic building is slated to break ground this spring, and we are ahead of the game in identifying the program needs and design for updating the athletic facilities for our students.

It is an exciting time to see the collective efforts toward our vision of becoming a college of choice for business and leadership education!