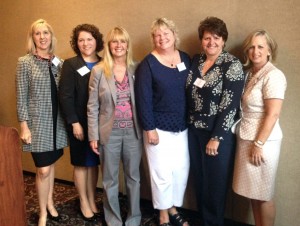 On September 11, 2014, I had the honor of welcoming more than 60 women to a breakfast organized by the Family Business Association (FBA) and co-sponsored by Nichols.

The organization recognizes that leadership in a family owned business, long a male-dominated role, is more frequently becoming the task of a wife, daughter, sister, or mother. At the meeting, the FBA recognized and celebrated this trend and examined the issues still faced by women who manage family businesses.

Jean Beaupre, Faculty Director of the Institute for Women’s Leadership at Nichols College, ably represented Nichols on the panel portion of the meeting, along with several female entrepreneurs and business owners.

On that panel, Jean made some important points regarding the role of women in business. Women bring traditionally “feminine” skills/traits to the workplace, such as collaboration, consensus-building, empathy, and multitasking. But it’s important to note that men also often possess these skills, and that women also possess traditionally “masculine” skills/traits like risk-taking, decision-making, confidence, etc. Today’s leaders need to balance both sides.

It isn’t a surprise that organizations with a higher than average percentage of women on boards and in executive positions outperform their competition. Women represent 50% of the population and up to 85% of consumer spending, so having women in decision-making positions reflects the market. Key development areas for future women leaders are: inspiration (women can achieve what they visualize), skill-building (i.e., negotiation, communication), and hands-on leadership opportunities – all of which we strive to build here at Nichols through the Institute for Women’s Leadership.