Yesterday, I had the opportunity to meet with our men’s soccer team who had an outstanding fall season and won the Commonwealth Coast Championship (CCC) for the second time in history. The team, hosted the 1st round of the NCAA Championships, won that game and then went on to face the #3 team in the country. 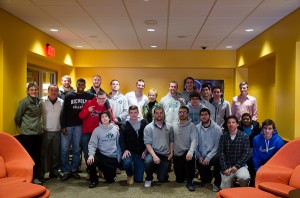 Although I know very little about soccer, it was incredible for me to watch the team win some very exciting games. The team faced a number of challenges this past season including losing four outstanding seniors. However, they rose to the challenge with 15 different players scoring goals during the season. I also want to congratulate their dedicated coach, Chris Traina, who worked hard to build the organization and ensure that every player knew his role and played it well.

As I talked with the team, I wanted to know what their “secret” was for such a terrific season, particularly given they were ranked in the middle of the CCC at the start of the season. They attributed it to their “team chemistry” and friendships off the field. It’s always rewarding to see a team that rises above expectations and delivers a remarkable outcome.