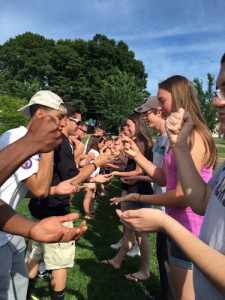 It’s only early August, but many of our incoming freshmen have already embarked on their college careers at Nichols. Their head start has come courtesy of our annual orientation for more than 300 new students and their family members, who attended one of four daylong sessions in June and July.

The daylong sequence of topics and presenters ranged from “Transitioning to College” and “Campus Life & Expectations” to “Supporting Student Success.” What made this orientation a success were the joint efforts of our directors of student involvement, advising services, and housing; representatives from student financial services; and our dean of students. 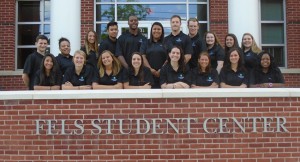 But the entire day depended as much on the efforts of almost two dozen Nichols students, who served as Student Orientation Leaders. During the day, these successful Nichols students worked with small groups of the attendees—showing them around, answering their questions, and putting them at ease about their upcoming leap into college life.

I think it’s amazing that all of these student leaders took a break from their other summer commitments to be part of orientation. And this year’s cohort even included two students who had graduated in May.

I think many of them remember back to when they were making the adjustment to Nichols and college life and how important it is to get off to a positive start and to begin to develop relationships.

When the members of the Class of 2019 arrive on campus for keeps at the end of August, they will encounter both challenges and opportunities. Besides having to find their way around, they’ll face the prospect of living here as responsible and independent young adults.

They will also have to hit the ground running at an institution where 40 percent of the graduates go on to head companies or start their own. And, uniquely to Nichols, all freshmen will learn and practice leadership from the get-go—through the required first-year course Lead 101.

It’s an exciting time to be at Nichols, and those who attended orientation have had a glimpse of what’s to come.