Earlier this month I invited five Criminal Justice Management majors to join me in hearing former FBI agent Richard DesLauriers speak at the Worcester Economic Club. As the Special Agent in Charge of the FBI’s Boston Field Division, he was at the center of the Boston Marathon bombing investigation as well as the arrest of notorious Boston crime boss and fugitive Whitey Bulger.

The Nichols students seemed riveted during his speech and later said that his was one of the most informative talks they had heard. While the evening for them represented a continuing education in their chosen field, for me it was sheer fascination.

Richard revealed the behind the scene details and the collaborative law enforcement work that went into capturing the Boston Marathon bombers. He also explained how his FBI team decided to track Bulger, who had been on the lam for with his girlfriend for 16 years, by seeking tips from people who might have encountered or spotted either one of them. The strategy worked. 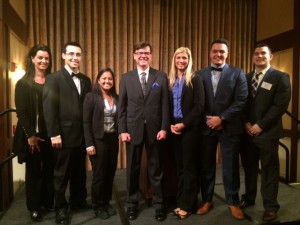 The evening began with a private reception for Richard. He was extremely gracious, greeted each student by name, and asked and answered several questions. He even mentioned Nichols College twice during his speech.

As always, our students made me proud. They were dressed professionally, poised and articulate, and appeared very comfortable in the social/networking part of the evening before the formal program.

There was one other Nichols representative at this gathering—Criminal Justice Management Professor Kim Charbonneau, under whom our program has flourished and expanded the horizons of every participating student.

Kim is truly exceptional with respect to her commitment to CJM students. She works with them on internships, travels with them to conferences, and is completely dedicated to their professional engagement and success.

Going to Florida in February is always a welcome prospect, but my trip a few weeks ago was made all the warmer, thanks to my reason for visiting Naples on the state’s west coast. There I spent a wonderful evening at our annual Naples Alumni Reception for those living in Florida fulltime and others spending the winter there. 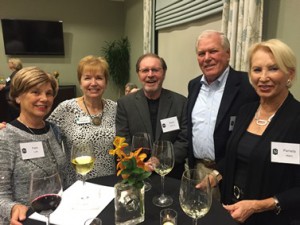 For the last five years, the numbers of alumni and family attending have more than doubled to over 60, ranging from the Class of ’54 to recent vintages. The event was again generously hosted by Nichols trustee and former board chair John McClutchy, Jr. and his wife Janet.

It was wonderful to see 1954 grads Earl Prolman and Richard Clinton. I was able to thank Earl personally for his plans to endow a new scholarship at Nichols, one of the latest in an exciting proliferation of endowed scholarships that will make a big difference for all of our students. 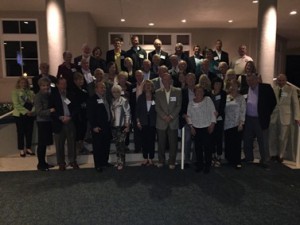 Robin Brown ’87, P ’19 shared the Nichols parent experience and Naples Reception Committee members Rachel Tenz ’11 and EJ McLean ’96 were also there to support the College. For me, it was a special opportunity to talk with some alumni I had not yet met and to reconnect with folks that I hadn’t seen since the year before.

A great evening, made possible by the balmy weather and the reminder that we have supportive alumni all over the country.