Homecoming weekend at the beginning of October lived up to its promise as a perennially special occasion at Nichols. From the Alumni and Legacy Dinner to the Golden Bison Reception, Nichols grads made the most of their return to campus and brightened up the rainy and dreary weather outside. 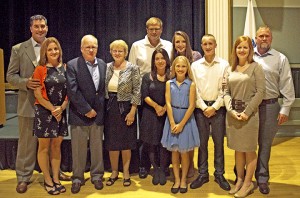 There were plenty of moments that stood out for me, including several remarkable examples of multiple family ties to Nichols. John White ’71 and MBA ’78, who received the Legacy Award on Friday night, has three daughters who all attended Nichols, and who all married Bison! John’s daughter Shannon serves as a member of the Nichols Board of Advisors as does he. Mary Hoey, Parent ’15, ’16, and ’18, received an honorary alumna award. 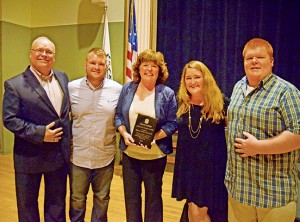 Then it was on to the Bison Den, where alumni—recent and from decades ago—joined current students and staff for a couple hours of music and fun. It was so well attended that we exceeded capacity, so folks could only enter as others exited! 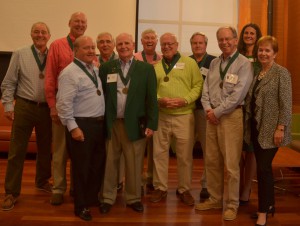 A highlight of homecoming for me is the Golden Bison Reception, where we honor graduates who are celebrating their 50th reunion. While many from the class of ’66 had stayed in touch over the years, several members had not seen classmates or been back to campus in 50 years.

Needless to say, they were amazed at how different the campus is today. Budleigh Hall is the only remaining residence hall from their time at Nichols. But is was clear that the Nichols campus from their days at the College lived on in their memories.