On Saturday, May 6th, I presided over my sixth Nichols commencement. These occasions never get old. They certainly do get a lot larger—an estimated 3,800 guests attended this year celebrating more than 480 graduates. 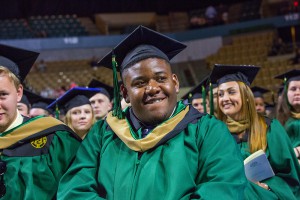 But the great thing about Nichols commencements is not quantity but quality of our graduates. The senior who had to attend his classes this year from home because of serious illness but who excelled nevertheless. Another who was the first in his family to earn a college degree and for whom 42 relatives drove from Ohio to see him cross the stage. This class produced not one, but two valedictorians, each with a perfect 4.0 average.

On the lighter side, one new graduate—a “triple Bison” who was receiving his third Nichols degree—lived up to his billing with a tattoo on his arm…of three Bison.

We heard from alumnus and honorary doctoral degree recipient Marty Allen ‘75, who achieved an amazing career leading high profile national retail chains. The lives of the new graduates would be determined 100% by the actions they take, he promised. 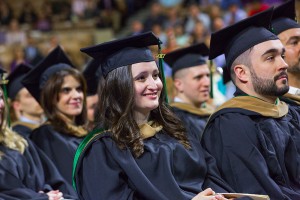 For my part, I raised a few eyebrows by telling the Class of 2017 not to follow their dreams. “Dreams are aspirational, and you need that. But those aspirations are useless without the planning and perspiration to transform those dreams to reality,” I explained, adding that their Nichols education had provided them the tools to become more than a dreamer.

There was plenty of hooting and hollering during the ceremonies, most noticeably when we asked different groups of new graduates to stand. We recognized the large number of students who were the first in their families to earn an undergraduate or graduate degree. We praised the many who worked at jobs for more than 20 hours a week while pursuing their degrees fulltime. And we saluted more than a dozen Nichols sons and daughters who attended the College on their veteran’s benefits after serving their country.

All in all, it was an amazing day.