Nichols class reunions never get old for me, and our annual Alumni Weekend at the end of September was no exception. Whether attending live athletic events, the Saturday breakfast to induct new members to the College’s athletic hall of fame, or honoring our oldest graduates, Nichols alumni have always struck me as appreciative of their years here—and genuinely happy to be back.

It was fun talking with the classes as they lined up to go onto Vendetti field at halftime of the football game. Many have stayed in touch with classmates. Many of them told me how wonderful the campus looked, how friendly our students were when they ran into them on campus, and how good it felt to be back on campus. 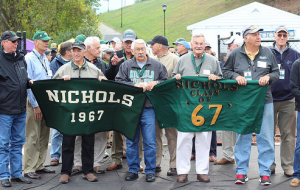 The class of 2017 was well represented. I got lots of hugs and comments about how folks missed being on the Hill. And the Golden Bison reception for folks who graduated in the Class of ’67 was the largest since we started this tradition in 2012. Forty members showed up for their 50th reunion!

Not to forget the culinary side: Taste of Nichols was a popular activity, with four alumni venues hosting samples for the crowds, including cold brew and hot coffee, lobster mac ‘n cheese, ice cream, and barbecue chicken.

On the athletic front, an alumna who was inducted into the hall of fame was a classmate of our new women’s basketball coach, MaryLynn Skarzenski. I also encountered the mother of an alumna inducted last year. Mom has now adopted Nichols and was around much of the day on Saturday even though her daughter could not attend Homecoming this year.

What I have also noticed is the continued increase in the numbers showing up for this special weekend, and the good time they have had. That is not surprising, and it matches the good time I have had with them.