Another academic year has come and gone, and on Saturday, May 5, I presided over my 7th commencement exercises. It has been truly rewarding to watch students grow and develop in their years with us, and I always tell them that they are leaving us at their best… for now. Many undergraduates are heading to new and exciting positions, others are just starting their job search, and 30 will be with us another year to complete a graduate degree. Of the 501 graduates this year (394 who attended commencement), there were 87 double bison, 19 triple bison, and 1 quadruple bison! 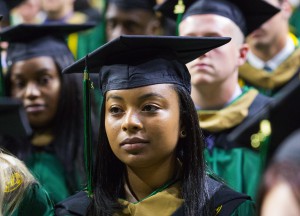 My advice to them this year was to “waste no time in carving out those moments to do the things that make you truly happy,” for it’s those moments that provide the strength to weather the ups and downs that inevitably come our way. Our speaker this year was Louis (Lou) Stroller ’63 – an assistant director, production manager, and producer on more than 40 films including Scarface, The Rock, Carlito’s Way, The Bone Collector, and Carrie. Lou shared one of his favorite sayings with the graduates – “Fear makes the wolf bigger than he is.” He reminded the graduates that they have the strengths to knock down the fear that they allow to take control. He told them to let that quote serve as a reminder to chase whatever dreams they have because you never know when and where an opportunity will present itself. We also awarded honorary doctorates to Marilyn Fels, an individual that is a household name in the local community for her unwavering philanthropic support, and Marcus Moran ’66, former CEO of Aubuchon Hardware. 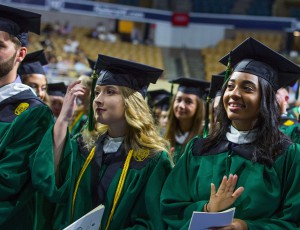 I always close my remarks with “no matter how far our bison roam, they will always be welcomed home on the hill.” My voice always wavers with those words because it is a bittersweet day to say goodbye. Yet with all those goodbyes, we are preparing for new hellos. In a few weeks campus will be alive again as we welcome the Class of 2022 for first-year orientation. These sometimes shy and apprehensive new students will be the confident graduates crossing the stage in four short years, and I’m sure I’ll choke up again.

On Sunday, April 22nd, Nichols held this year’s second and final Accepted Student Reception—an event at which we welcomed a host of next year’s freshmen and their families and others not yet committed to coming here next fall.

Almost 140 students attended, and all received information on what to expect of academics and life at Nichols. Over the course of the morning and three back-to-back sessions, they explored academic majors, extracurricular activities, and our signature professional development and leadership programs.

I told our future freshman—future Bison, I called them—that we need them to make us stronger as a college tomorrow, just as the current student body represents our strength today. I asked those still finalizing their college choices to use their heads and hearts in making a consequential life decision.

It was significant to me that some of the students attending were looking to transfer from Mount Ida College in Newton, Massachusetts, which will close its doors later this spring because of financial difficulties. That recent and surprising decision has been sobering to the many small, private colleges around Massachusetts.

I was asked by both parents and students how they could be sure we’re not the next Mount Ida. I discussed financials and offered to share audited financial statements. One of the students who posed this question had transferred to Mount Ida last year only to find himself seeking a new academic home for his senior year.

I also pointed to the bright careers awaiting our graduates, in particular those of an award-winning movie producer and a former CEO of the retail chain Aubuchon Hardware. Both received honorary doctorate degrees at the Nichols commencement ceremonies on Saturday, May 5.

Then it will be on to preparing for the Class of 2021.