Veterans Day is a solemn occasion at Nichols. On Monday, November 11th at 11am, the Academy Bell was rung 21 times. The community was encouraged to pause for a moment of silence. A presentation, shown throughout the day on building monitors, honored the 15 faculty and staff who have served or are still serving in the military.

In the prior week, the college held two other events to recognize and aid veterans. On Monday, November 4th, we held a dinner attended by 90 Nichols faculty, staff, students, and local veterans, several of whom spoke about servant leadership and what it meant to them to serve their country.

The following Thursday afternoon, over 70 Nichols faculty, staff and students registered to run or walk 22 laps on our track in support of Project New Hope. This organization supports retreats, deployment reunions, and individual and family services for military personnel who have returned from combat.

The 22 laps stood in sad recognition of the 22 service members who take their lives every day. One of the most moving parts was when members of our cross country team took the first lap with the American flag and flags for each of the military service branches.    22Lap Event – Cross Country with flags

Thanks to our gold status as a Military Friendly School, participation in the national Yellow Ribbon scholarship program, and membership in the SALUTE honor society, every day has become a veteran’s day at Nichols. We have a dedicated office for our growing number of veterans and military service students. We focus on their needs as non-traditional students who often have families, and we combine their leadership experience with our own leadership education.

These approaches have had a positive impact on recruitment. The transfer credit policy and credit for prior learning programs have made the transition back to school easier for the veterans and military students, as it recognizes their unique training and experience by awarding credit appropriately.

When it comes to our student veterans, though, we get as much benefit as we give. They bring a level of maturity and a track record of commitment to a campus that already thanks them for their service.

Having a very successful professional athlete talk about his career and personal life is an invaluable experience for our students. When that athlete happens to come from an NFL championship “home” team, all the better.

That’s just the experience Nichols students enjoyed recently when Rob Ninkovich, the recently retired star linebacker for the New England Patriots, came to campus. Rob met with the football team in the locker room, Sport Management majors in an upper level course, and—in an open session—anyone else from the Nichols community who wanted to hear from him.

Rob’s football history proved an education in itself. He shared that he went from community college to Purdue, an unusual step in big-time college football. And he talked about calling the Purdue coach 30 times, until the latter finally called him back to say, “Quit calling me.”  The coach later relented and allowed Rob to prove he was worthy of being on the team. It was good for students to hear that persistence and a solid work ethic will help overcome obstacles.

To the football players, Rob talked about the importance of working hard and doing your best for the team. The questions from the Sport Management class ranged from how he came to his current role with ESPN (Rob shared his fear when that red light in the studio went on for the first time) to how he feels about up and coming Patriot Chase Winovich wearing his old number (50).

Along the way, Rob provided his share of take-away one-liners:

“The pain of regret lasts forever. The pain of sacrifice is temporary.”

For me, Rob’s appearance was truly a highlight of my time here at Nichols. He is engaging, honest, and down-to-earth. I love the fact that he graciously gave his time and shared his stories. And I must admit that I have an affinity for players on the defense, although I didn’t tell Rob that I have four #54 jerseys (celebrating Tedi Bruschi), and none with #50.

As you can see, I’m a big fan of the NFL, and the Pats, although they weren’t always my team. With my family from the Pittsburgh area, the Steelers are also near and dear to my heart.  I used to watch Steelers games with my “Pappy,” who would school me on the statistics of the players, including Franco Harris (a Hall of Fame running back who played 12 years) to defensive tackle “Mean” Joe Greene. I would have loved to talk with Pappy about one of my all-time favorite players, “The Bus” –Jerome Bettis, a running back for the Steelers.

But on this day, Rob Ninkovic proved more than a winning substitute.

There are many occasions to value during the academic year—Move In day, the basketball team’s Senior Night, and, of course, Graduation Day. To those, we have happily added A Taste of Nichols, which has come to serve as one of our Parents’ Weekend events, and then some.

The Parents Weekend agenda ranged from information sessions from Residential Life and Student Affairs, to a Murder Mystery Dinner, to Bingo. We even squeezed in a football game, a great 40-17 win against Becker College. (I was a bit concerned in the first quarter when the score was so close. It was nice to see our team stay focused and pull away for a convincing win.) 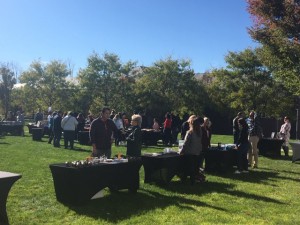 And the attending families more literally get a taste of Nichols at a food court featuring Sodexo Dining Services and local restaurants on the quad. The pumpkin ravioli was my favorite!

I saw very proud students giving families private tours on campus. The majority of parents have first-year students here. It’s nice to hear them talk about what a good experience their daughter or son is having.

I did talk with the parents of a junior who were here for the first time to truly experience the campus. (Their prior experience had been dropping off and picking up their son.) They were very complimentary about how beautiful the campus was and how they have marveled at watching their son grow/mature/hone his leadership skills.

While we told parents what we’re doing, it was nice to hear back about how we’re doing.

I casually met folks all day in a Fels classroom and the Fitness Center, at the football game, and during my favorite activity—Bingo, which was student-run and where the prizes included plenty of branded Nichols items from t-shirts and sweatshirts to glassware. On the way out one dad told me he was disappointed we didn’t give away second semester tuition as one of the prizes.